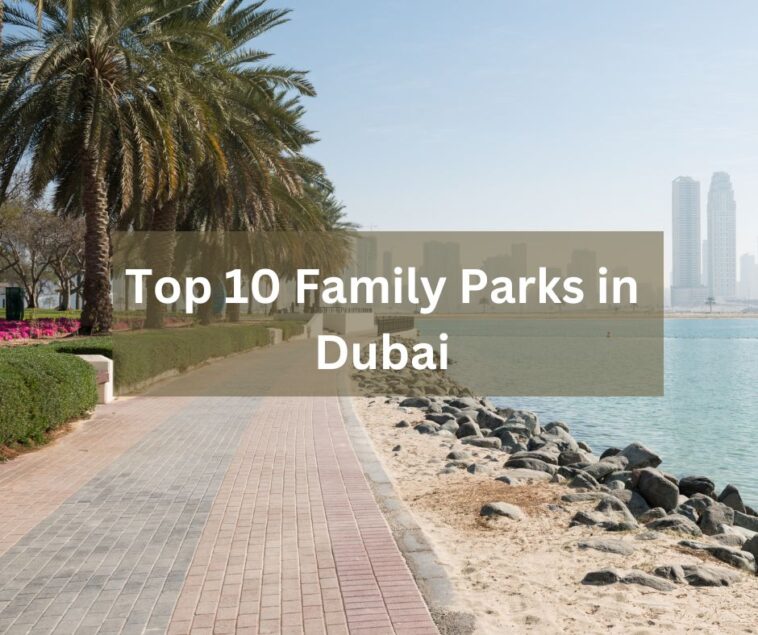 The city of Dubai is covered in green spaces. City parks put a strong emphasis on family-friendly activities and provide a ton of amenities and things to do for the kids.

The Dubai government has also taken sure to accommodate exercise, and many of the parks feature great, dedicated running and cycling tracks, as well as team sport grounds, courts, and fields.

Dubai’s green spaces see little use during the daytime during the oppressively hot summer months of June through August. However, local families and individuals go for walks and runs in the parks after nightfall when the temperature has dropped a bit.

In the cooler months (about October to April), when picnicking and grilling are most popular, Dubai’s parks are busiest. On a nice weekend day, the busiest parks may be crowded.

Major Dubai tourist attractions are housed in some parks, including Zabeel Park and Burj Park, while Dubai Miracle Garden is a standalone tourist destination.

Small entrance fees, often between 3 and 5 UAE dirhams, are typically charged at parks managed by the Dubai municipality. These can only be paid for with the Dubai NOL card, the city’s top-up transportation card that is also accepted on all Dubai public transportation.

Once the oppressive heat of the summer months has passed, local families love to visit this sizable park, which is located in the center of Dubai and covers 51 hectares.

With a dinosaur park (complete with animatronic dinosaur models and a small museum devoted to dinosaurs) and a glow garden, which is illuminated with twinkling lights to create a fairy-tale garden after dark, both in the park’s southern section, there is plenty to keep the younger members of the family entertained. The park contains playground equipment for kids in a number of different designated places.

The Dubai Frame, which is located in the northeastern corner of the park, is what draws city visitors while local families enjoy picnics on the expansive lawns and local runners use the running track at Zabeel Park. This picture-frame-shaped observation tower takes you 150 meters up to the sky deck for panoramic views of the entire city and features exhibits that take you through Dubai’s history.

To enter the park, there is a nominal entrance fee. Al Jafiliya is the closest metro station.

Safa Park, one of the first devoted public park areas in the city, was established in 1975. Visitors can now marvel at the fact that Safa Park used to be beyond the city’s boundaries because the metropolis has long ago encircled it and moved steadily southward, putting it in the middle of Dubai.
Safa Park, which is renowned for its excellent team sports amenities, features tennis, basketball, and volleyball courts as well as a running track. You may also hire bikes there to ride the park’s paths.

Rentable pedalo boats are available at the boating facilities on the artificial lake in the middle of the park. There are numerous locations with playground equipment throughout the park for families with young children.

The lawn here can accommodate many picnickers, and there is a designated barbecue area, if you want to spend a more leisurely day just relaxing in the greenery. In the event that you don’t want to make and bring your own meals, there are also cafés and restaurants located within the park.

The park has a nominal entrance fee. Metro station Business Bay is the closest.

The second-largest public park area in the city is called Creek Park, which hugs the western bank of Dubai Creek.

The promenade that encircles the creek here is the main draw for many tourists, whether they come to stroll and take in the scenery or to take pictures of the creek.

Surrounding the vast lawn areas where families congregate on the weekends when the weather is nice are manicured flower bed displays.

There are several cafés and restaurants located within the park, as well as a designated grilling area for families and groups looking for a more complete picnic experience.

There are rental bicycles available on-site if you want to ride your bike along the park’s twisting trails.

The science-activity center Children’s City is located in Creek Park’s southern section and offers kid-friendly park activities there. There is a planetarium, a theater, and a ton of hands-on science exhibits inside.

There is a nominal entrance fee for Creek Park. Oud Metha is the nearest metro station.

Mushrif Park, a 13-acre green space on the eastern edge of the city, is a popular among parents looking for a place for their kids to run around and burn off some energy. It offers a variety of activities for both younger and older children.

The northern part of the park is home to Aventura, Dubai’s tree-top adventure-activity course with numerous rope swings and ziplines. Mushrif also has a public swimming pool complex, one of which is specifically designated for kids.

Along with running tracks and designated cycling pathways, the park also has a horse riding school that offers both ad-hoc rides and ongoing lesson packages.

Mushrif serves as a popular destination for both local teams and groups of friends looking to kick around with a football field, basketball court, and volleyball court.

Mushrif is a well-liked location for local bird watchers since some portions of the park are covered with dense (for the UAE, at least) thickets of trees. There is plenty of lawn space and a designated barbecue area with fire pits for picnickers.

A model village with tiny versions of famous buildings from around the globe may be found in the park’s center.

A small admission fee applies. Mushrif Park is most easily reached by automobile.

Burj Park is a welcome patch of green amidst Dubai’s massive steel and glass buildings. It is located right in the center of Dubai and neighbors the Burj Khalifa, Dubai Opera House, and Dubai Mall.
For the greatest views of the fountain performances on Burj Lake, head here. The performing fountain in Dubai is the tallest in the world, with fountain shows that may shoot up to 50 floors high.

Burj Park is a well-liked location for views and pictures of the nearby high-rises.

The park includes a planted green area at the base of the Burj Khalifa and a bridge-accessible artificial island across from it.

The park’s expansive lakeside promenade is a favorite spot for cyclists, runners, and evening strollers. It’s also a great place to go after dark if you want to take pictures of the lights of Downtown Dubai. Along the promenade, there are numerous locations with contemporary art installations and sculptures.

There is no admission charge. The Burj Khalifa/Dubai Mall metro stop is the closest metro station.

The privately run Dubai Miracle Garden is the park to visit if you want to promenade among enormous and elaborate floral arrangements. Over 150 million blossoming flowers fill the 72,000 square meter space of this enormous floral garden.

The flower displays include enormous floral A380 airplanes (which is the largest floral sculpture in the world), strange 3D creations, and intricately planted flower beds, villages, and castles.

Contrary to Dubai’s public parks, you cannot bring outside food or beverages into the park area, however there are 30 venues for refreshments, including restaurants, more straightforward cafés, food kiosks, and shops.

There is an entrance fee and the park is open from roughly November to April each year (though children under three have free admission).

There isn’t a metro station close by because the park is in Al Barsha South, but you may get off at the Mall of the Emirates station and take a bus to Dubai Miracle Garden from there.

The park’s 52 acres are covered in well-kept garden strips, and there are many trees to provide shade for the wide, 1.5-kilometer running path that circles the lake.

The park’s main draw for neighborhood exercisers is its rubber-surfaced running track, which is well-liked by walkers, skaters, and runners alike. Al Barsha Pond Park’s bike rental facility rents out bicycles, e-bikes, and go-karts. A separate cycling path circuit winds around the lake.

Instead of walking around the lake, you can rent pedal boats to go out onto it.

There are three kid-friendly playground spaces on-site for neighborhood families. Within the park, a few cafés serve refreshments.

Entry to the park is free. Local city buses provide the easiest access to public transportation.

In the northern part of the city, Al Mamzar Beach Park combines a beach with a green area. The region includes a short peninsula’s point that protrudes into the water and faces Sharjah.

The beaches are the main attraction for the great majority of visitors. There are five sand strips: four on the beach park’s eastern side and one on the western side. Between them is a spacious (55,000-meter) stretch of well-kept lawn bordered by palm trees, with several curving routes for cycling, running, and strolling across the region.
In the garden area, there are designated spots for grilling and lots of room for picnics. If you haven’t brought your own food, the park’s several food stalls and a few cafés offer refreshments.

A small admission fee applies. City buses are the easiest mode of public transportation to utilize.

This parks area in the mixed-use neighborhood of Jumeirah Lake Towers, to the east of Dubai Marina, is a tastefully manicured green space bordered by both high rises and small artificial lakes.

The expansive, well-kept lawns here are a favorite place for locals to let their children burn off some surplus energy. Here, there are also a few playgrounds for little kids that are well-equipped, as well as a small football field.

The park, which is surrounded by numerous cafés and eateries, is a favorite hangout spot for locals on the weekends.

Many neighborhood parents with strollers, runners, and bikers utilize the trail that circles the lake.

The park has no entrance cost. Dubai Marina station is the closest metro stop.

This little park is a popular place for locals to exercise. Visitors come here to run or stroll on the park’s jogging path, which is overlooked by the Burj Al Arab hotel in the distance.

This is a wonderful alternative for nighttime exercise for area joggers and runners because the jogging circuit is well-lit after dark, making it especially well-liked by the neighborhood’s single female runners.

Despite its tiny size, the park is well suited for families and has a sizable, well-kept playground area for kids as well as picnic tables for larger parties that like to spend more time there. Around lunchtime, a lot of families who are spending the day at the nearby Umm Suqeim Beach come here.

There is a café located inside the park if you don’t want to bring your own meals.

Umm Suqeim Park doesn’t charge a price for admission. The city bus is the simplest form of public transportation. 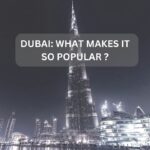 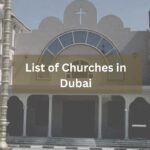