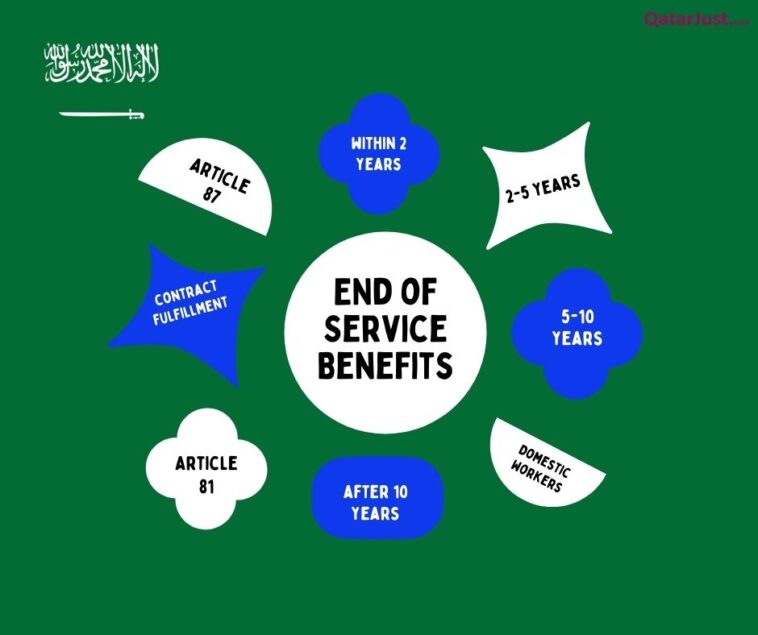 As we all know that every worker working in KSA is authorized to receive end-of-service benefits at the end of his work term. In this article, we have talked about the two end-of-service (ESB) calculators and also discussed the calculation in depth according to Saudi Labor Law. Let us know whether this article helped you to understand this or not in the comment box!

Well, we have formed this ESB calculator and also experimented with it many times. You just need to do the following things-

This ESB calculator has formed by the Ministry of Labor of Saudi Arabia. https://laboreducation.mlsd.gov.sa/en/calc

Fill in the following details-

Who is allowed to get ESB?

As we said above, every worker who is working in KSA is authorized to get the ESB with the subsequent 3 exceptions-

ESB in case of termination

According to article 84 of Saudi Labour Law, an employee is allowed to the following end of service benefits in case of a terminus-

ESB in case of Leaving

However, there are approx 7 various scenarios that have an impact on the calculation of ESB in case of leaving.

According to article 85 of Saudi Labor Law, if you leave within 2 years without finishing your contract, then you are not allowed to and ESB.

According to article 85 of SLL, if you leave after two years before 5 years of service, you are entitled to-

Example : if an employee works for 4 years in the organization and his salary is 12000 SR  per month the following calculation will apply

According to article 85 of SLL, if you leave after finishing 5 years but before 10 years of service, you are allowed to –

For example : if the employee has resigned after completing 8 years tenure in the organization and his last drawn gross salary was SR 12,000 per month. His calculation would be as follows

If you leave after 10 years you get the full end-of-service benefits awards as mentioned in article 85.

For Example : If the employee leaves the organization after completing 12 years and his last month total salary was SR 12,000/- per month. His calculation would be as follows.

If you leave at the contract fulfillment, you are allowed to have ESB grants-

If you leave under article 81 of SLL, you are allowed to get all the benefits.

According to article 87, the later workers are allowed to get a full ESB grant-

What is covered in the ESB?

According to article 2 of Saudi Labor Law(SLL), all the fixed grants paid to a worker are covered in the ESB such as-

As per article 88 of SLL, a worker is required to pay ESB within-

A worker has the right to file a lawsuit if the ESB is not paid within two weeks.

Moreover, No bank is authorized to withhold end of service benefits of the employees untill if there is any judicial decision made to do them so stated by Saudi Arabian Montery Agency.

Please note that above mentioned KSA End of Service Benefit calculator is not for domestic workers and would not calculate domostic workers ESB.